The Handbook of Social Policy was originally conceptualized as a 'state of the field' of social policy that examines past, current and future directions. Since its publication, it has been adopted in masters and doctoral programs as a text and thus should be revised to stay current.

Since its First Edition, much has changed in US social policy, such as a new presidency and political party and the terrorist attacks of September 11th. Within the field of social work, there has been increased attention to issues of diversity and social justice. The Second Edition of this Handbook follows a similar format but with a few key changes.

Changes to the Second Edition:

" A more streamlined format has been implemented to make the Handbook more consistent with the way most instructors teach their courses.

" Content will be added to reflect the areas that have received increased attention, such as Advocacy, Policy practice, Immigration issues, Discrimination, and more. 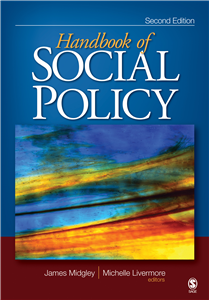