Following the illuminating first-hand revelations about the war in Europe and the Middle East compiled inWitness to War, Richard Aldrich now taps into another huge variety of diarists to explore the Second World War in the Pacific. From the dramatic bombing of Pearl Harbor to the devastating moment when the atomic bomb was dropped upon Hiroshima, the war is brought to life through the diaries of people on all sides, with events recorded as they happened and drawn into a chronological account of the war by Aldrich's expert month-by-month commentary.The Faraway Waroffers a stunning and diverse range of diaries, focusing both on ordinary people, some of whose diaries are published here for the first time, and on more celebrated figures such as Evelyn Waugh, Charles Lindbergh, Harry Truman and Joyce Grenfell. With this second volume Richard Aldrich now completes the picture that he began withWitness to War, by creating an intimate and illuminating portrait of a whole world ravaged by war. 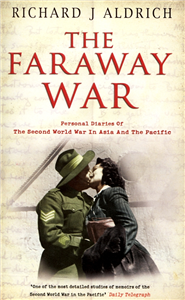 Andrew Lownie Associates has chosen to review this offer before it proceeds.