The Encyclopedia of Libertarianism

Recent years have seen the reemergence of libertarian thought as a significant force, both in the academy and in political life. As libertarian ideas have gained in prominence, so has the need for a standard reference work. Accordingly, this project has been initiated to serve as a useful introduction to and compendium of libertarian scholarship via a series of brief articles on the historical, sociological, and economic aspects of libertarianism within the broader context.

As a continuation of the older tradition of classical liberalism, libertarian thinking draws on a rich body of thought and scholarship. Contemporary libertarian scholars are continuing that tradition by making substantial contributions to such fields as philosophy, jurisprudence, economics, evolutionary psychology, political theory, and history. Notably, a number of economists who profess classical liberal or libertarian views have received the Nobel Prize in recent years, such as Vernon Smith. Robert Nozick's book Anarchy, State, & Utopia sparked a tremendous debate among philosophers and has influenced moral and political theory. Evolutionary psychology has emerged as a new forum for the study of human nature, and much of that work has been pioneered by libertarian-leaning thinkers. Ronald Coase, Richard Posner, Richard Epstein, and others have revitalized the study of jurisprudence by focusing attention on incentives and on such grown institutions as property and common-law rules. Libertarians also have been active in political life, especially since the collapse of the communist states, which focused attention on problems of the formation and evolution of rights and legal institutions. The works of libertarian thinkers such as F. A. Hayek, Ayn Rand, and Milton Friedman are now available in dozens of languages, much as the works of Marx and Lenin were decades ago.

Within the entries contained in this encyclopedia, readers will find overviews of all this and more. 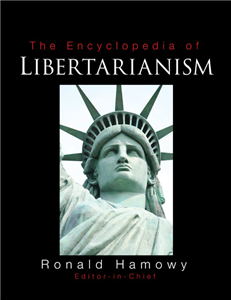