The Elimination of Child Labour: Whose Responsibility?

`This is an inspiring, humbling account of what can be done with vision backed by infinite determination. And though the book tells of a relatively small success, affecting a few thousand children in one district, it's also a handbook for others to follow, as well as a wake-up call for governments and individuals across the world' - Gerald Haigh, Times Educational Supplement

As is widely acknowledged, the undesirable practice of child labour robs children of their childhood, denies them access to education and shunts the growth and development of future citizens. Despite general agreement on the need to eliminate child labour, this menace continues to flourish, especially in developing countries like India where it exists in large measures. While many efforts have been made to eradicate child labour, few of them have succeeded in practice or have had a long-term impact.

This important book reports a successful programme to tackle the social evil for child labour which was implemented by the author in a rural area of Andhra Pradesh. Without going into the pros and cons of child labour, the book is premised in the belief that it should be eliminated and emphasises that the only way this can be achieved is through education.

Analysing the reasons that led to the success of the programme, the author identifies four major factors:

· involving the community in tackling the problem.

In her account, Parmila Bhargava brings in the voices of parents, teachers, farmers and the children themselves. In conclusion, she distils her experience and presents a cost-effective, practical and viable model, which can be used by anyone engaged in tackling the phenomenon of child labour.

Based on first-hand, grassroots experience and written in a refreshingly direct manner, this book will be of immense value to all those working to eliminate child labour. It will also be of interest to those in the field of education, sociology, public administration and development studies as also to NGOs, social activists, policy-makers and funding bodies. 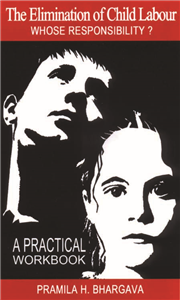