Peter Philips, the time-traveller from 'Saving the Dinosaurs' (also by Jane Waller), now thirteen, is sent back 5,000 years to Ancient Egypt at the time of the Fourth Dynasty. There he finds a world where the wheel has not yet been invented, where the prayers of the Pharaoh alone guarantee that the Nile will provide sufficient water for the crops, and where Ra-Atum, the Sun God, has to travel by boat throughout the Underworld each night in order to rise next morning.

Shortly after his arrival he is befriended by the Pharaoh's daughter, Princess Mer-tio-tess, who believes he is a spirit sent to help her. While increasingly attracted towards the Princess he finds himself drawn into a web of power struggle and rivalry.

And things get worse when Peter, by accident, brings her back to present-day London, a cold place filled with sad-looking people which, she believes, must be the Underworld. 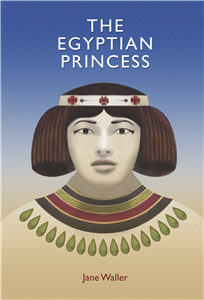 When  her memoir “Me Jane” comes out it will be Jane’s 18th published book.  Novels for children, works on ceramics, knitting, social history, the role of women in the Second World War; they’ve been coming out regularly since the first, ‘A Stitch in Time’, helped to launch a revival of interest in hand-knitting in 1972.

And if that wasn’t enough, she has studied painting and sculpture, glass-blowing and ceramics (producing work described by the Arts Editor of the International Herald Tribune as “among the greatest creations of twentieth century pottery”).  Now, in her little cottage on the Chequers Estate, she divides her time between writing and drawing, having just finished a memoir of her childhood while working on a final draft of her 5th novel for children, in which two competing groups of Weather Makers (including Hebrides the Witch, German Bight and the strangely indecisive Fitzroy/Finisterre) battle to take control over the world’s weather.

Glis-Glis Publishing has chosen to review this offer before it proceeds.