Essential Tips for Buying and Selling On Ebay.co.uk

Michelle, daughter of a Catholic opera singer and Jewish stockbroker, traces her fascinating journey, from her life as a Catholic nun, back to her Jewish roots. She talks about her confusion in growing up; conversion to Judaism at the age of 12; meeting Padre Pio, a Capuchin monk with the stigmata, in Italy; her life in the convent of the Holy Cross in Aliwal North in the 70s; living in apartheid South Africa in the 80s and its influence on her life. She deals with sexuality and the repercussions, both sexual and emotional, of child abuse. An attempted rape sets the author on a journey of healing through macrobiotics, which takes her to Switzerland where she learns to heal both her body and her relationship with her father. During her stay in Israel, Michelle learns to face her anger against men, and is set free to love herself again. In a candid portrayal, Michelle tells of the poignant relationship she shared with a young gay man dying of AIDS in Seattle. This title encompasses a vast range of experiences and relationships, from the difficulties of childhood, stepparents, young love and abuse, to pregnancy and abortion; from fear and anger to forgiveness and healing. 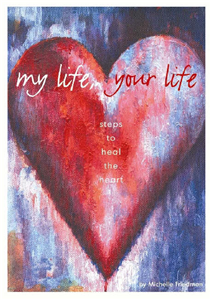