Sir George Macartney, was of mixed Scottish-Chinese parentage. Based in remote Kashgar on the famous Silk Road, he was caught up in the great 19th and early 20th century power-struggle between Britain, China and Russia over control of Central Asia in what came to be known as ‘The Great Game’. Here he met the scheming Russian Consul Nicolai Petrovsky who was to prove a cunning adversary in the political contest for control in this turbulent region. Much of the book is concerned with Petrovsky’s devious machinations to outflank the British agent. Macartney’s wife, Catherine, has provided intimate descriptions of their domestic life and some of the hazardous journeys they made with their family when travelling to and from the United Kingdom on leave. Her very few visitors were unstinting in their praise for her courage and adaptability, not least when seriously threatened by revolutionaries. They also recognised that only George Macartney, with his renowned tact and diplomacy, allied to steely determination, could have maintained the British position with so little external support. His dangerous encounter leading a mission to the Bolshevik revolutionaries in Tashkent made for a dramatic finale to his extraordinary career in a restive region now causing concern to the Chinese government.// “A tale of intrigue and suspense, hardship and homesickness, geopolitics and high policy….The story of another age … that still has relevance today.” ... Macartney’s character shines through this book. James McCarthy has performed a great service by bringing to light the remarkable achievements of this quiet, humble and highly effective exemplar of a style of diplomacy we neglect at our peril. ... The region of Xinjiang, where Kashgar is the second city, sits at the heart of one of the least stable parts of the globe, bordering Russia, the Central Asian republics, Kashmir, Afghanistan, Pakistan. It has been a disputed territory for centuries, finally incorporated into China only in the 18th century. … If, as many believe, this is to be China’s century, then Macartney’s old stomping ground will have an important part to play. This book, and the history it helps bring to mind, is thus a useful source of knowledge and insight into a region we can expect to hear about a lot more.” -- Graham Leicester, HM Diplomatic Service, 1984-1995. 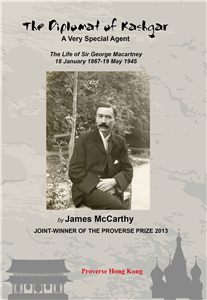