The Decline of Representative Democracy

Based on a leading scholar's firsthand observations of legislatures as well as extensive interviews with legislators, legislative staff, and lobbyists, this important work describes and analyzes the contemporary state of legislatures and the legislative process in the fifty states. It explores the principal elements of legislatures, including the processes by which legislation is enacted, the impact of the media, political competition and partisanship, lobbyists and lobbying, the challenge of ethics, the role of leadership, and the linkage between legislators and their constituencies.

Thematically, Alan Rosenthal argues that despite the popular perception that legislatures are autocratic, arbitrary, isolated, unresponsive, and up for sale, legislatures are, in fact, extraordinarily democratic and becoming more so. He concludes, furthermore, that the dangers to representative democracy today are substantial.

The Decline of Representative Democracy builds on the growing literature in state politics and state legislatures. It also relies on the author's participant-observer research, interviews conducted especially for this book, and his years in the field.

Many illustrative examples help to clarify the theoretical points made throughout the book, which in turn provide provocative sources of debate for students of the legislative process. 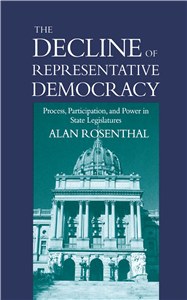