BASED ON TRUE EVENTS this is a tale of International espionage, illegal arms, love, deceit and murder.

It's 1993 and the Russian state of Chechnya is threatening independence. Russia's oilfields are in Chechnya and the Russians are desperate to keep hold of them. Self- proclaimed Chechen President Dudayev sends Mikhail Kaynskov and his brother to London as Ambassadors, to seek recognition for an independent Chechnya. They are also commissioned to buy arms from a corrupt MOD official to defend Chechnya against Russia. Kaynskov has unlimited funds, a passion for high living - and prostitutes. The KGB blackmail two Armenian petty criminals, Gregor and Rostya to go to London and carry out a mission for Russia, to put a stop to Chechnya's plans. KGB Agent Vee kills Kaynskov's London contact, takes his place and establishes Gregor and Rostya as the Ambassadors' assistants.

MI5, under the watchful eye of Andrew Harrigan and The Foreign Office are aware that British involvement could end in another cold war so follow developments, merely monitoring the situation. The Armenians fail to abort the arms deal. Agent Vee receives instructions from the KGB and orders the Armenians to eliminate the Ambassador. Unwillingly, Gregor and Rostan carry out the murders. Through a mixture of incompetence and greed the bodies are discovered in a cardboard packing case by the delivery driver and the Armenians are arrested. Whilst on remand Gregor becomes suicidal and tries to persuade his lawyer, Leon Chainey, to arrange a deal with MI5 in exchange for information about the KGB. He knows that if the KGB find out they will kill him so Chainey arranges for him to be moved to Belmarsh high security prison for safety. In Chechnya the situation worsens, Dudayev - desperate for arms, sends more 'diplomats' to London and a hit man called Vasler to avenge the deaths of his Ambassadors, the Kaynskov brothers. But Vasler does not stop at the killers. This bizarre trail of events are subsequently unveiled through the London courts of justice and the news media. Meanwhile in Chechnya a war with Russia develops, which continues to this day. 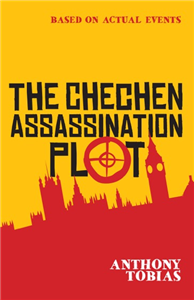 "A really terrific read. Fact or fiction I found it a real page-turner. Entertaining, and somewhere between Ian Fleming and Dan Brown, I couldn't wait to find out what would happen. A rattling good read!" Alan Swedloff

Anthony Tobias lived a long life and enjoyed a varied career. Born in 1918 he was conscripted into the army at 21 and served for six years, throughout the World War II first as a pilot and later running a University in South Italy for the Army Education Corps.

After demob he pursued an industrial career, and following retirement continued to work initially as a court reporter then as Practice Manager for a firm of West End solicitors. For most of his adult life Anthony was also a writer of plays- two of which were broadcast on BBC radio- short stories and several books based on his experiences.

Married for almost 60 years before his wife passed away, Anthony leaves a son and daughter several grand -children and great grand-children. He remained a keen cyclist, scrabble, snooker player and writer- almost till his death in 2015.

Alliance Publishing Press Ltd has chosen to review this offer before it proceeds.