Military men have a special place in Lucy Parmenter’s tortured heart. For the past few months, Army Captain Gus MacBride, stationed in Afghanistan, has transformed her lonely life at a North Carolina refuge for abused women and their children. The texts, emails, and phone calls between him and Lucy bubble with restrained heat; his sisters (Pickle Queen Gabby and Biscuit Witch Tal) have let on that Lucy has a painful history, and he romances her gently.

When several of her sheep show up on a freezing January morning with full-body mohawks, Lucy’s psychic “wooly clairvoyance” says the wool thieves are hiding in nearby woods owned by the MacBrides, and that Tal knows all about them. She confesses: they’re veterans—men, women, and one service dog—suffering from PTSD, suspicious and jumpy. She’s taken them to heart and won their trust with apple pies.

Lucy struggles with her fear of strangers while her heart is drawn to people so much like herself. When word of other minor thefts start to cause talk around the Crossroads Cove, Lucy has to get involved.

When Gus tells her he’s coming home on leave soon, she realizes her challenges are just beginning. 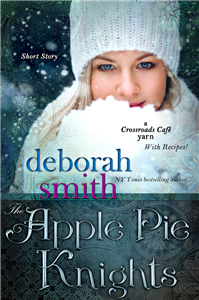 BelleBooks has chosen to review this offer before it proceeds.