The Alternate Nation of Abanindranath Tagore

The Alternate Nation of Abanindranath Tagore provides a revisionary critique of the art of Abanindranath Tagore, the founder of a 'national' school of Indian painting, popularly known as the Bengal School of Art. It categorically argues that the art of Abanindranath, which developed as part of what has been called the Bengal Renaissance in the 19th-20th centuries, was not merely a normalization of nationalist or orientalist principles, but was a hermeneutic negotiation between modernity and community, geared toward the fashioning of an alternate nation, resistant to the stereotyping identity formation of the nation-state. It also establishes that his art-embedded in communitarian practices like kirtan, alpona, pet-naming, syncretism and storytelling through oral allegories-sought a dialogic social identity within the inter-subjective contexts of locality, regionality, nationality and trans-nationality.

The author thus presents Abanindranath as a creative agent who, through his art, conducted a critical engagement with post-Enlightenment modernity and regional subalternity. He sought transcendence or individual autonomy on the one hand and communitarian inter-subjectivity on the other, which the author sees as the postcolonial legacy of his art. The author theorizes this modernity and communitarian inter-subjectivity as an alternate nationalism.

This book is well-illustrated with many of Abanindranath's creations. It will be a rich reference work for students, researchers and academics from various subject areas such as arts and humanities, sociology and cultural studies, and precious for artists, art collectors, connoisseurs, museums and art galleries. 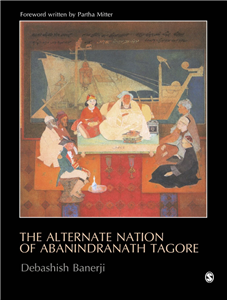