Since the Stonewall Riots in 1969, the politics of sexual identity in America have drastically transformed. It’s almost old news that recent generations of Americans have grown up in a culture more accepting of out lesbians and gay men, seen the proliferation of LGBTQ media representation, and witnessed the attainment of a range of legal rights for same-sex couples. But the changes wrought by a so-called “post-closeted culture” have not just affected the queer community—heterosexuals are also in the midst of a sea change in how their sexuality plays out in everyday life. In Straights, James Joseph Dean argues that heterosexuals can neither assume the invisibility of gays and lesbians, nor count on the assumption that their own heterosexuality will go unchallenged. The presumption that we are all heterosexual, or that there is such a thing as ‘compulsory heterosexuality,’ he claims, has vanished.

Based on 60 in-depth interviews with a diverse group of straight men and women, Straights explores how straight Americans make sense of their sexual and gendered selves in this new landscape, particularly with an understanding of how race does and does not play a role in these conceptions. Dean provides a historical understanding of heterosexuality and how it was first established, then moves on to examine the changing nature of masculinity and femininity and, most importantly, the emergence of a new kind of heterosexuality—notably, for men, the metrosexual, and for women, the emergence of a more fluid sexuality. The book also documents the way heterosexuals interact and form relationships with their LGBTQ family members, friends, acquaintances, and coworkers. Although homophobia persists among straight individuals, Dean shows that being gay-friendly or against homophobic expressions is also increasingly common among straight Americans. A fascinating study, Straights provides an in-depth look at the changing nature of sexual expression in America.

Instructors: PowerPoint slides for each chapter are available by clicking on the files below. 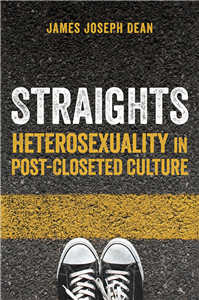 The New York University Press has sought to reflect the intellectual vitality of NUP by publishing a wide array of provocative and compelling titles, as well as works of lasting scholarly value.

NYU Press has chosen to review this offer before it proceeds.