The Poetics of Paul Celan

This book brings together five powerful encounters. Themes central to all of Derrida's writings thread the intense confrontation between the most famous philosopher of our time and the Jewish poet writing in German who, perhaps more powerfully than any other, has testified to the European experience of the twentieth century. They include the date or signature and its singularity; the notion of the trace; temporal structures of futurity and the "to come"; the multiplicity of language and questions of translation; such speech acts as testimony and promising, but also lying and perjury; the possibility of the impossible; and, above all, the question of the poem as addressed and destined beyond knowledge, seeking to speak to and for the irreducibly other. The memory of encounters with thinkers who have also engaged Celan's work animates these writings, which include a brilliant dialogue between two interpretative modes - hermeneutics and deconstruction.;Derrida's approach to a poem is a revelation on many levels, from the most concrete ways of reading - for example, his analysis of a sequence of personal pronouns - to the most sweeping imperatives of human existence (and Derrida's writings are always a study in the imbrication of such levels). Above all, he voices the call to responsibility in the ultimate line of Celan's poem: "The world is gone, I must carry you," which sounds throughout the book's final essay like a refrain. 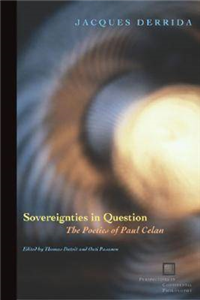