“You only live on land. Allow us to live in the seas.”

Rison will implode soon. They desperately need a new blue planet, a water planet. But Earth is crowded. Will humans be able to open their hearts to an alien race?

He’s an alien. She’s not quite human.

Can they survive an epic battle under the sea?

Jake Rose’s girlfriend, Em Tullis, has mysteriously disappeared, leaving only a one-word clue: “Phoke.” His search takes him around the world to fabled Aberforth Hills in the North Sea, home of earth’s native aquatic people, the Mer—who are now known as Phoke. They’ve remained hidden for centuries, only emerging now in a desperate search for a cure to a Rionian water-borne illness.

The intergalactic negotiations have just become impossibly complicated. Rison needs a refuge for thousands of their people before their planet implodes in a science-gone-wrong scenario. Originally, they asked Earth, “You only live on land. Allow us to live in the seas.” But Earth’s seas aren’t empty! With the Phoke at the negotiation table, Rison’s hope look bleak. Even worse, when Jake finds Em, she’s infected with a Risonian water-borne organism that threatens her life.

For fans of Ender's Game or I Am Number Four comes a new character-driven science fiction series, The Blue Planet’s World series. Sirens, the second novel, follows Jake and Em as they fight for survival of their species, both in space and under the sea. 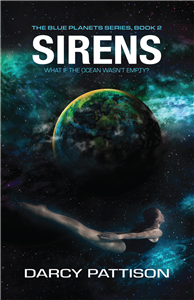 Storyteller and writing teacher DARCY PATTISON has been published in nine languages. Her books, published with Harcourt, Philomel/Penguin, Harpercollins, Arbordale, and Mims House have received recognition for excellence with starred reviews in Kirkus, BCCB and PW. Three nonfiction nature books have been honored as National Science Teacher's Association Outstanding Science Trade books. The Journey of Oliver K. Woodman (Harcourt) received an Irma Simonton Black and James H. Black Award for Excellence in Children's Literature Honor Book award, and has been published in a Houghton Mifflin textbook. She's the 2007 recipient of the Arkansas Governor's Arts Award for Individual Artist for her work in children's literature. In sixth grade, Pattison read the entire Lord of the Rings trilogy and Ender's Game, which left her with a life-long fascination for science fiction and fantasy. Her first published novel, THE WAYFINDER, was a fantasy. With the publication of THE BLUE PLANETS WORLD series, she returns to the genre she's always loved.

Mims House has chosen to review this offer before it proceeds.