More than 130 years after his death, the operas and philosophy of Richard Wagner (1813–1883) continue to provoke controversy. A man of unquestioned artistic brilliance, he was also a fierce nationalist and outspoken anti-Semite, who was posthumously embraced by the Nazis and became a cultural hero of the Third Reich. Though he changed the course of classical music, in his personal life Wagner was an overbearing and ruthless megalomaniac, who stopped at nothing to achieve his ambitions.

In Simply Wagner, musicologist and author Thomas Grey navigates the turbulent course of Wagner’s life, as he sought to create a total “musical-dramatic art work of the future.” From his early “romantic operas” through the harmonic cataclysm of Tristan und Isolde, to the epic 16-hour cycle The Ring of the Nibelung, Grey traces Wagner’s musical development, clearly explaining the nature of his achievement. Grey also shares key events in Wagner’s personal life, including the composer’s relationship with his patron, “mad” King Ludwig of Bavaria, and his extended affair with Cosima von Bülow—eventually his second wife—who bore him three children while still married to someone else.

Written for a general readership, Simply Wagner offers a complete portrait of Wagner the man, the thinker, and the artist, and explores the circumstances that made him the most discussed artistic figure of his time, and one of the most controversial ever since. 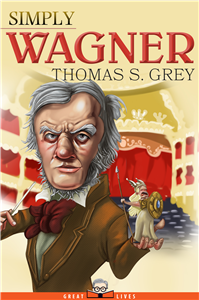 Thomas Grey is a professor of music at Stanford University. He is the author of Wagner's Musical Prose: Texts and Contexts (1995), as well as editor and co-author of The Cambridge Companion to Wagner (2008), and Richard Wagner and his World(2009). Grey has also written on Beethoven, Mendelssohn, and the history of 19th-century opera.