Sherlock Holmes and the Mayfair Murders

Only a few short years ago the monster known as Jack the Ripper held the East End of London in a grip of terror. Now there are rumours that the Ripper has returned. Three respectable young women have been slaughtered in Mayfair, the city’s most respectable and exclusive district – but instead of consulting Sherlock Holmes, the official police prefer to seek advice from Dr. Karl Schermann. And while the flamboyant German enjoys official approval and public acclaim, Holmes sits at home, brooding.

Things start to look up with the solution of an ingenious theft at Cantle’s auction house, and when Dr.Watson persuades him to take a short holiday on the Sussex coast, Holmes’s investigation of blackmail reveals something even darker and more dangerous.

The detective and the doctor return to London, where another innocent young lady has been killed. Before Holmes can bring the Mayfair murderer to justice, however, he must uncover the truth about Dr. Karl Schermann.

David Britland is a freelance writer specialising in magic, psychology, the paranormal, con tricks and illusion. He has worked on shows such as Channel 4’s Equinox series, The Real Hustle for BBC3 and is a consultant on the hugely popular Derren Brown programmes. In 2005 he was awarded a Literary Fellowship by the Academy of Magical Arts. 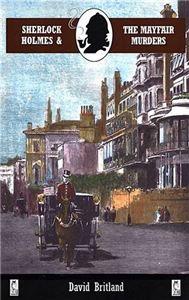 Baker Street Studios has chosen to review this offer before it proceeds.