Why the most cruel despotic wars burst out in monotheistic societies

In his new book Saving Monotheism, Prof. Rotenberg claims that the answer to the existential question` why the most cruel despotic wars burst out in monotheistic societies, may be found in the fatal distortion of this divine idea which was supposed to unite the believers in one god. Accordingly. Rotenberg divides the world into masculine “raping missionaries” who impose on others their definition of socio-religious norms because They” know what god wants”. However, according to the alternative feminine “conversive” definition of monotheism, people have to seek the invisible god via romantic creative inter human interactions. The feminine romantic model is derived from the biblical story of Ruth the Moabite mother of David’s Kingdom which may be used as a metaphorical pattern for nonviolent social relations. Hence the Ruthian feminine romantic model may disseminate such egalitarian ideas as “my god is your god” and “my people are your people”, because only “women who do not rape” may enhance friendly social relations. For applicable possibilities Rotenberg proposes the “couching” system according to which a potential virtuous in music, sports or a new religion, joins free willingly a romantic training program which is grounded on a dialogic contract between the coach and his novice. The outlined romantic model includes also a new expanded framework for intimacy by rereading the story of the maiden Avishag and the aging King David as an anti phallocentric system for erotic relations. Prof. Mordechai Rotenberg books in English: Author's books in English: Damnation and Deviance: the Protestant Ethic and the Spirit of Failure, New York: The Free Press, Macmillan 1978. Also published in Japanese, Tokyo: Heibon Sha 1986. New English Edition: New Brunswick, Transaction, 2003. Dialogue with Deviance: The Hasidic Ethic and the Theory of Social Contraction Philadelphia: ISHI Publications 1983. Second edition, University Press of America, 1993. Also published in Portuguese, Brazil, Imago Press, 1999. Hasidic Psychology: Making Space for Others, New Brunswick: Transaction, 2003. Re-Biographing and Deviance: Psychotherapeutic Narrativism and the Midrash New York: Praeger Publishers, 1987. Dia-Logo Therapy: Psychonarration and “PaRDeS” New York: Praeger Publishers, 1991. The “Yetzer”: A Kabbalistic Psychology of Eroticism and Human Sexuality, Northvale: Jason Aronson Inc., 1997. The Trance of Terror: Psycho-religious Funda-MENTALISM, Jerusalem: Rubin Mass Pub. 2006. 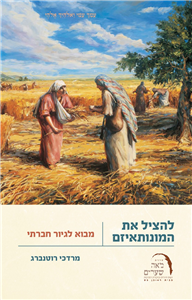 Rubin Mass Ltd. has chosen to review this offer before it proceeds.