Well-known and rightly admired for her marathon solo bicycle journeys along the Himalayas, to Jerusalem and down the Nile, Bettina Selby decided, in the summer of 1988, to explore a country that was, on the face of it, all too familiar, yet turned out to be as beautiful, as exotic and as unexpected as anything she had come across in remoter places.

Riding her trusty eighteen-gear bicycle, Evans, and carrying with her a tent, a sleeping-bag and as little as she needed for the outdoor life, she left London in search of the continuing England that lies beyond the motorways, the suburbs and the great conurbations. Her outward journey took her through the Cotswolds, the Welsh Borders, Staffordshire and the Peak District: but the purpose of her journey was to explore the North - the country of St Cuthbert and Wordsworth, Beatrix Potter and the Venerable Bede - and it was in the Lake District, along Hadrians Wall, in Lindisfarne and in Durham that she found the unchanging England of her memories: the England, too, of Sellafield and Teesside and a thousand exhaust fumes shimmering in the mountain air.

An evocation of open air adventure at its best. 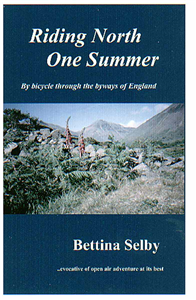