by Arjomand, Said; Tiryakian, Edward A;

'At last, a volume on civilization that truly reflects the complexity of multiple civilizations. The wealth of contributions Arjomand and Tiryakian have assembled demonstrates the value of an old concept for understanding the awful dilemmas confronting human kind in the global age. Its thoroughgoing renewal here establishes this book as the essential benchmark for future scholars of civilization' - Martin Albrow, Founding Editor of International Sociology and author of The Global Age - winner of the European Amalfi Prize, 1997

'In our tension filled world, many are heralding, and others fearing, a"clash of civilizations." The contributors to this volume provides a healthy and persuasive argument about why this clash need not, and certainly should not, take place. They do so, moreover, not by rejecting the concept of civilization, but by developing a less primordial, homogenous, and essentialist concept of it. An important collection that provides illumination in this sometimes frighteningly dark time' - Jeffrey Alexander, Professor and Chair of Sociology at Yale University

'The concept of civilization may well replace the notions of globalization and identity as the core component in the vocabulary of 21st century sociology. The authors contribute a great deal to the clarification of fashionable controversies around the "clash of civilizations" and "multiculturalism". They go a long way toward purging the concept of civilization of its ideological overtones, and they suceed admirably in turning it into powerful analytic tool of an emerging fleld of macrosociology, known already as civilizational analysis' - Piotr Sztompka, President, International Sociological Association

Although the concept of 'civilization' has deep roots in the social sciences, there is an urgent need to re-think it for contemporary times. This book points to an exhaustion in using 'the nation state' and 'world system' as the basic macro-units of social analysis because they do not get to grips with the 'soft power' variable of cultural factors involved in global aspects of development. Also, globalization requires us to reconsider the link between civilization and a fixed or given territory.

This book focuses upon the dynamic aspect of civilizations. Among the topics covered are:

Â· Civilizations as zones of prestige

Â· The clash of civilizations. 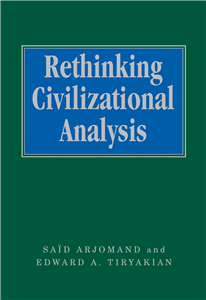