The Memoirs of a Career Ambassador

“These memoirs, by a seasoned and highly competent career diplomatist, covering his various involvements with Latin America and his frequent tiffs with his own government, give an authoritative and amusing picture of the trials of foreign service life and work around the period of the Second World War.”

Ellis O. Briggs (1899-1976) entered the Foreign Service of the United States in 1925. During the next 37 years he was ambassador to seven countries: the Dominican Republic, Uruguay, Czechoslovakia, Korea, Peru, Brazil, and Greece. An eighth appointment, to Spain, was cancelled when he retired due to illness. He also served in Cuba, Chile, Liberia, and China. His memoirs are an exhuberant record of a gifted diplomat.

Briggs reached the highest rank attainable in the Foreign Service—Career Ambassador—and received the Medal of Freedom from President Eisenhower for his service in wartime Korea. He gained a reputation for successfully handling large diplomatic missions and dealing with difficult situations. But his greatest virtue was his honesty, his passion to report things just as he saw them and make policy recommendations regardless of conventional wisdom in Washington. He employed a high sense of humor, often to devastating effect, on bureaucrats at home as well as adversaries abroad. His strong views about policy sometimes placed him in conflict with others; fellow Dartmouth graduate Nelson Rockefeller had him fired from the Foreign Service because of disagreements (Briggs soon returned to the Service).

A down-to-earth New Englander with an abiding love of the outdoors, Briggs was devoted to his wife and family as well as to his country. Proud Servant is full of insights about the practice of diplomacy in this century and provides a fascinating account of the modern Foreign Service. 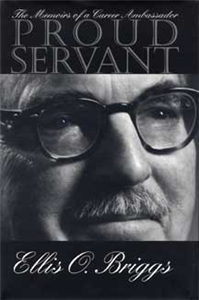