Protecting the Health of the Poor

Social Movements in the South

Nowhere is the injustice of the global distribution of income and wealth more palpable than in health. While the world’s affluent spend fortunes on the most trifling treatments, poor people’s lives are ruined and often cut short prematurely by challenges that could easily be overcome at low cost: childbirth, diarrhoea, malnutrition, malaria, HIV/AIDS, measles, pneumonia. Millions are avoidably dying from such causes each year and billions of lives avoidably blighted by these diseases of poverty. Drawing on in-depth empirical research spanning Asia, Latin America, and Africa, this path-breaking collection offers fresh perspectives from critically engaged scholars. Protecting the Health of the Poor presents a call and a vision for unified efforts across geographies, levels and sectors to make the right to health truly universal. 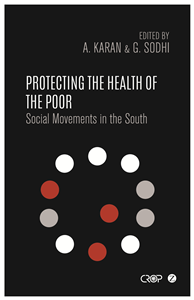 Argues for a comprehensive agenda for a fight against poverty and for protecting the health of the poor.

‘As the world moves from the Millennium Development Goals to much more extensive Sustainable Development Goals, Sodhi and Karan are to be congratulated in giving us a timely reminder of the complexities involved. The book provides essential guidance for all development practitioners and reminds us to beware of easy fixes.’ Saman Yazdani Khan, director of the Centre for Health and Population Studies, Pakistan 'This timely volume explores poverty and health in the context of the free market. Tracing ambiguities and contradictions in the commodification of medicine, the application of human rights to safeguard the health of poor people is illustrated with clarity and conviction. In an era of deepening divisions between the many and the few this is a critical contribution.' Lucia D’Ambruoso, lecturer in global health, University of Aberdeen ‘This book is a comprehensive assessment of the health consequences of poverty: it is courageous in its honesty and appropriately demanding of its reader. We must act.’ Stephen Leeder, emeritus professor, The University of Sydney 'Protecting the Health of the Poor is an immensely important and timely volume. It sheds powerful light on movements of resistance and hope.' Amiya Kumar Bagchi, emeritus professor, Institute of Development Studies Kolkata ‘Presents compelling evidence of diverse health inequities, traversing both political economy and political ecology, that continue to haunt global conscience. Accounts of progressive movements and interventions help sustain optimism in the continuing struggle towards achieving health as an undeniable human right.’ Rajib Dasgupta, Jawaharlal Nehru University 'A thought-provoking and provocative collection of essays that amount to an urgently needed call for action in promoting global health. Contains important contributions from scholars and development practitioners in many countries.' Nicole Hassoun, Binghamton University

Abraar Karan is an MD candidate in the Global Health Pathway at the David Geffen School of Medicine at UCLA, where he serves as the Student Body President. He graduated with distinction from Yale University with a degree in political science (focus in health policy and politics), and as a Yale Journalism Scholar, having served as the first dual Editor-in-Chief of both the Yale Journal of Medicine and Law and the Yale Journal of Public Health. He has worked in a number of countries, including India, Mozambique, Uganda, Nicaragua, the Dominican Republic, Honduras, and Mexico. Abraar’s research has focused on marginalized populations, including sex trafficking victims, child soldiers in sub-Saharan Africa, those afflicted by neglected tropical diseases, the elderly and disabled, those involved in gang conflict, and people living with HIV/AIDS. He has served on several national global health committees, including the UC Global Health Initiative, the Consortium of Universities for Global Health, and the AMA Standing Committee on Global and Public Health. His writings have been featured in a number of well-known publication venues, including Medscape, The Lancet, Academic Medicine, PLoS Global Health, Global Post, Kevin MD, and the Global Health Hub. His academic and personal interests are in health leadership, health systems development, and global health and human rights policy. Geeta Sodhi, DNB (Paeds), is a qualified paediatrician who veered into public health and the development sector more than two decades ago as a social entrepreneur. She has undertaken capacity-building work at the regional and international levels for both government and non-government sectors and has pursued original research, evidence-based programming, and advocacy related to the health, rights, and vulnerabilities of marginalized populations. She served as CEO of Swaasthya, a national NGO that she founded, which then went on to become a member of global initiatives such as the Global Alliance of Vaccine Initiatives and Partnerships in Maternal Newborn and Child Health. She has also consulted for and/or been on the advisory board of international NGOs such as World Health Partners, Global Health Strategies, and UN agencies. Her research has been published in various edited volumes, and she has been an invited speaker at several international conferences and academic institutions. Dr Sodhi’s work has been supported and recognized by several philanthropies, including the MacArthur, Rockefeller, and Ford foundations. She received the MacArthur Population Innovations Fellowship Award in 1995.

Zed Books is a critical and dynamic publisher, committed to increasing awareness of important international issues and to promoting diversity, alternative voices and progressive social change. We publish on politics, development, gender, the environment and economics for a global audience of students, academics, activist and general readers. Run as a workers’ collective, Zed Books aims to operate in an ethical and environmentally sustainable way. Autumn 2016 catalogue

Zed Books Ltd has chosen to review this offer before it proceeds.