'Fans and disciples of Seymour Sarason all know that education reform needs a change in course. Indeed, the daily practices of schools, education research, and US educational policy all need such a change. Neither Professors Glazek and Sarason, nor anyone else, can give yet a complete description of what these changes would involve. But when the change happens, the leaders of the change will all acknowledge their considerable debt to this book. The reason is that the needed change in school classrooms will be very hard to recognize as such unless these leaders are thoroughly familiar with the concept of 'a context of productive learning.' In this book, Glazek and Sarason collaborated on an extraordinarily daunting attempt to create and analyze a context of productive learning in which, simultaneously, Sarason was the student and Glazek the teacher and vice versa. They attempted what must surely be a 'Mt Everest' example of the concept: explanation of Einstein's famous formula, E=mc².áThe result should be of intense interest to a broad audience concerned with the present problems of science education as well as the nature of a context of productive learning.' -Kenneth G. Wilson, H. C. Youngberg Trustees Distinguished Professor Nobel Laureate for Physics, 1982 Department of Physics, The Ohio State University 'By making accessible and intelligible Einstein's theory of relativity, this remarkable book reveals to its readers the power and possibility of their own learning and, in doing so, brilliantly demonstrates the power and necessity of productive learning for everyone.' -Andy Hargreaves, Thomas More Brennan Chair in Education Lynch School of Education, Boston College 'Professors Glazek and Sarason have written a creative and instructive book that will be read for years to come. Drawing upon their backgrounds in physics and psychology, they support EinsteinÆs recommendations as to the importance of the humanities. The authors' purpose is to help readers acquire a substantive grasp of how Einstein accomplished what he did and the implications of this for educational reform. The reader's view of teaching and learning will be forever changed by the authors' insights.' -Dale L. Brubaker, Professor University of North Carolina 'This is an interesting and provocative book, written by a psychologist with several thousands of hours of observation and analysis of classroom teaching in public schools and a physicist. The book starts with a critique of teaching in our schools and explains why educational reform has been so minimal in its effects. The movie 'Mr. Holland's Opus' is used as a distinguisher between good and bad teaching methodology. These chapters are followed by physics chapters on the foundation of Einstein's E=mc¦. The authors follow Einstein's thinking and use the features of light as a vehicle for their discussion. They fold in stories and shy away from formulas, which they leave for appendices. The book ends with a chapter on the philosophy of teaching. The book is well written and eminently readable; the arguments are easy to follow. I recommend the book to anyone interested in the basis of modern physics and Einstein's role in it.' -Ernest M. Henley, Professor Emeritus of Physics University of Washington Use the concept of productive learning to reframe school reform!áWhy do people, college-bound or even in college, stay away in droves from courses in science, especially physics? Why do people know so little about the significance of Einstein's contributions which require dramatic changes in how we understand ourselves, our world, and the entire universe? Why have educational reforms failed? In this book, two professors, one a particle physicist and the other a psychologist, confront these questions in a unique way based on the assumption that people can grasp on a non-superficial level what Einstein did in 1905 if, and only if, the features of productive learning are taken seriously. The authors make clear that those features are applicable in teaching any subject matter by devoting two chapters to music and other arts. In the case of science, they chose Einstein's work precisely because of the general belief that it cannot be assimilated by 'ordinary mortals' whose brains are not 'wired' to comprehend the ways in which time, mass, energy, and the speed of light are seamlessly interrelated. But this book is not an attempt to popularize Einstein. Its goal is to demonstrate that features of the context of productive learning are applicable to any teacher-student relationship, regardless of whether the student is in first grade, in high school, or in college. Einstein's work was about alignment of frames of reference of observers in physics. A similar process of alignment between the minds of a student and a teacher is the vehicle of productive learning. The book explains the analogy. The authors discuss and emphasize that educational reform will continue to fail as long as the concept of learning is fuzzy and provides no direction to the teacher-student relationship. Reform efforts will continue to fail unless and until they are based on a clear distinction between contexts of productive and unproductive learning. 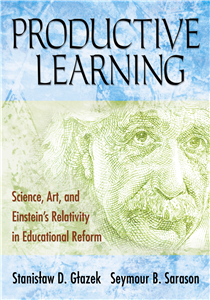