PLN-EQR – Planisphere for the Equator area

The perfect way to learn how to recognise the stars and constellations, very accurate between 15° north and 15° south latitude

This is an English double planisphere, for 10° north and 10° south, perfect anywhere between 15° north and 15° south. It is a square planisphere, 25 x 25 cm, with four pages. Two of these pages carry the star charts and upper discs, a third a concise introduction to astronomy and the fourth (back) page the instructions and a few interesting tips. 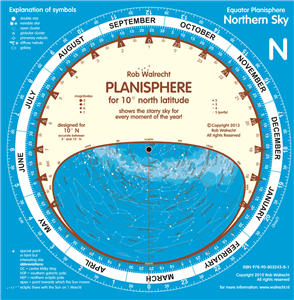