From the 23rd to 26th of November 2009 in La Palma island, in the Canaries, the Comparative Education Society in Europe (CESE) organized an international symposium entitled PISA under Examination: Changing Knowledge, Changing Tests, and Changing Schools. During four days seventeen leading scholars of Europe and America presented their contributions to debate the different problematiques of the remarkable phenomenon represented by the OECD Programme for International Student Assessment or PISA. PISA is not merely an educational event. It is also a media circus which involves the public rehearsal for reasons for failure or success; and even, in some cases, public and political and academic explanations about why 'failure' was not really that, and why 'success' was not really that either. At the centre of all these indications, we find the growing influence of international agencies on education and schooling which is decisively contributing to a marketisation of the field of education, in the context of an increasingly multilevel and fragmented arena for educational governance based on the formulation, the regulation and the transnational coordination and convergence of policies, buttressed at the same time by the diffusion of persuasive discursive practice. Organized in four sections entitled The Comparative Challenges of the OCDE PISA Programme, PISA and School Knowledge, The Assessment of PISA, School Effectiveness and the Socio-cultural Dimension, PISA and the Immigrant Student Question, and Extreme Visions of PISA: Germany and Finland, the contributions of this book offers a comprehensive approach of all these challenging and significant issues written from different and distinct research and academic traditions. 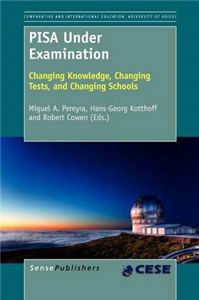