PARANOIA (The Walk and Talk with Angela) shows a man of solitary habits and a background of family disruption and multiple relationships. Disturbed by his girlfriend, Angela, who calls him "oblivious", he reflects on his past life, focusing on many people and topics that he previously ignored. He acknowledges his faults and selfishness, and finds cause to give thanks to all who have played any part in his life, including mother earth and the universe itself. It is through the mea culpa of his narrative that a picture emerges of his past empty and unhappy life. Gradually, this becomes intertwined with unusual events in his present life, meetings with new acquaintances and their stories, and a high-minded plot to expose and frustrate the alleged war-mongering plans of North Korea and end the screams of torture victims in "the camps"./For a long section of the text, this seems like a classic and detailed study of developing schizophrenia and paranoia, but the external plot proves that the strange present events experienced by the anti-hero have a real existence beyond his brain./This, Caleb Kavon's third novella, bears his hallmark –reflective seriousness. His concern at the errors of individuals and the flaws in the societies they create and perpetuate is brightened by the suggestion that greater engagement and appreciation of what one has are first steps that we all could take. 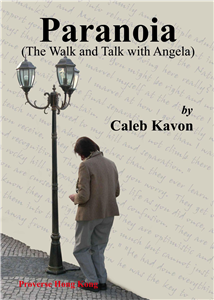