The True Story Behind The Movie Pain & GainThis book proves that sometimes the truth is stranger than fiction!

What if you were kidnapped, tied to a wall for a month, starved, humiliated, tortured and then they tried to murder you, but you survived? What stories would you tell of how you were able to survive and the struggles you went through? What if you went to the police and they did not believe you? What would you do to evade those trying to kill you and how would you bring the criminals to justice before they struck again? How would that change your life and the way you perceived the world and  people? Read this amazing book to find out!


The year was 1994, Marc and his family lived and ordinary middle class life in Miami, Florida. Little did he know that in November of that year his life and that of his family would change forever. The events that were to unfold could not be conceived by the wildest imagination.
In this amazing book he narrates the events that led to his kidnapping and his attempted murder. It will transport and place you in the warehouse where he was held and give you a unique perspective of the events that transpired during that horrific month and the physical and mental struggle to beat the odds and survive.
Marc chronicles his story in torturous detail. His humiliation, pain and suffering at the hands of the Sun Gang Gym and his miraculous survival.
You will understand how and why he survived and that everything can be taken from a human being, but the one's spirit and determination to survive can never be.
No one believed his story, not the police or anyone else. Nevertheless, he maintained steadfast and determined to bring the criminals to justice before they struck again.
Truly a harrowing tale and one that not only you soon won't forget but will uplift and inspire you!! 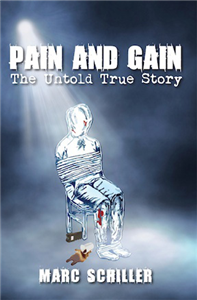 This compelling book proves the rule that truth is stranger than fiction. One cannot read Pain and Gain without coming away with admiration for the author and contempt for the men who kept him prisoner, tortured him, and tried to kill him. This is not only a story of pure evil, it is a story of strength and renewal. It's also a book that you can't put down once you've started to read it. My hat is off to Marc Schiller for his courage, resilience and talent as a writer.." J. David Bethel, author of Evil Town

"I think that Marc Schiller has done a remarkable job in telling his story; a first-time writer who is recounting a trauma that most individuals couldn't even imagine -- and he's produced a book that is compelling, captivating, and moving. Not to mention inspirational. Schiller didn't turn into a monster bent on revenge; he remained a man with dignity and character, in spite of everything he endured. This is a true story that has, without a solitary doubt, earned the label "remarkable." Trust me when I tell you: Read. This. Book". Keenly Kristin{Book Review}

"Despite having sat through the entire trial, and having heard the live testimony, I still find myself cringing at Marc Schiller's description of his captivity, torture and attempted murder.This book speaks volumes about the evil that some are able to perpetrate and the tragedies that others are able to overcome." Judge Alex Ferrer October 9, 2013

From the Back Cover

"This case was very emotional to sit through. It still bothers me to some extent.....I don't think it could have been worse if he had been a prisoner of war"-Judge Alex Ferrer

Marc Schiller was born in Buenos Aires, Argentina immigrating to Brooklyn, NY with his parents when he was seven years old. An early entrepreneur, he started several small businesses by the age of nine. He attended high school in Brooklyn, participating in sports and was member of the school's track team.

Marc received a bachelor's degree in accounting from the University of Wisconsin-Milwaukee and a MBA from Benedictine University. Marc has had a long and diversified career both as a professional and entrepreneur. His professional career has spanned the U.S. as well as internationally. On an entrepreneurial level, Marc Schiller has launched several successful businesses including two accounting practices both in Miami and Houston, a delicatessen in Miami and an options and stock trading company.

Marc Schiller currently works as an accounting and tax resolution specialist for a national tax resolution company. He has two grown children: his son graduated from the University of Colorado-Boulder with a degree in economics and his daughter currently attends Loyola Marymount University in California.