New Englanders on the Ohio Frontier

Migration and Settlement of Worthington, Ohio

Travelers in Worthington, Ohio, might think they were in a New England town. Old brick buildings line the very edges of the sidewalk, and a picturesque village green is flanked by two church steeples. Like most frontier communities, it reflects the heritage of its founders. In New Englanders on the Ohio Frontier, Virginia and Robert McCormick examine the founding and development of Worthington to show how it reflects New England culture transplanted and reshaped by the western frontier.

The founders of Worthington left a wealth of primary sources, which the McCormicks have mined to tell the town's story. Within nine months of Ohio statehood in 1803, the settlers surveyed the town, organized a subscription library and an Episcopal Church, provided temporary housing for one hundred settlers, and granted one the right to “keep a public house for the entertainment of travelers if any there should be.” Within a few years Worthington had a newspaper advertising a farm for rent with a “tolerably comfortable cabin," a store offering “European and India Goods” in addition to domestic products, an academy offering students "Latin, Greek, or French” for $6.00 a term, and testimonials for the threshing machine, invented by a local farmer, that would “thrash forty-five sheaves in five minutes.”

Despite Indian alarms during the War of 1812, failure to secure the seat of the state capital, and the economic depression that followed the banking collapse of 1819, Worthington prospered and grew. This case study of one community provides a perspective from which historians can better understand the process of westward migration and frontier settlement. 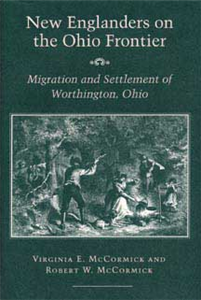