Excavating Buried Memories in the Railways beneath London and Berlin

Networked Remembrance is the first book to explore questions of urban memory within what are some of the most commonly experienced subterranean margins of the contemporary city: underground railways. Using London’s and Berlin’s underground railways as comparative case studies, this book reveals how social memories are spatially produced – through practices of cartography and toponymy, memory work and memorialization, exploration and artistic appropriation – within the everyday and concealed places associated with these transport networks. Through numerous empirical excavations, this book highlights an array of different mnemonic actors, processes, structures and discourses that have determined the forms of «networked remembrance» associated with the subterranean stations and sections of the London Underground and Berlin U- and S-Bahn. In turn, it invites readers to descend into the «buried memories» that are often imperceptible to those travelling by rail beneath the British and German capitals and encourages them to ask what other memories might lie latent in the infrastructural landscapes beneath their feet. This book was the winner of the 2014 Peter Lang Young Scholars Competition in Memory Studies. 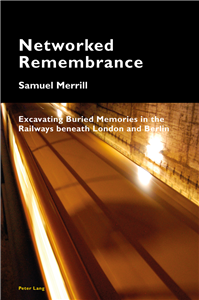