Something evil is going down in Atlanta...

Adrian Broussard and Greg Woodhall are attending OutlantaCon, Atlanta's annual gay geek conference, and are looking forward to a weekend of cosplay and general nerdy fun. As they mingle with other conference goers, though, Adrian feels a strange, cold energy emanating from a man dressed as a satyr.

Encounters with storybook creatures roaming the streets only increase the chilly tendrils teasing Adrian's sixth sense—strong enough to cause disturbing visions of Greg's existence being erased.

When a girl at the conference goes missing, then turns up dead, clues literally drop in their laps as Adrian begins to fear the cold, alien energy is engulfing the whole city. And in danger of swallowing up his lover.

To Adrian's horror, his worst nightmare is realized. Now both he and Greg must call on reserves of strength and resourcefulness they never knew they possessed to save Atlanta, and each other. 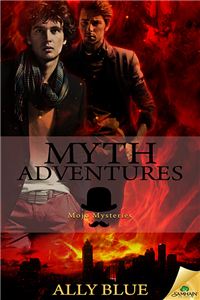