The collection includes ten compelling stories of murder, madness, and mayhem that span more than a century of American history and homicidal criminality that will keep you reading from beginning to end.

1. Murder at the Pencil Factory: The Killing of Mary Phagan - 100 Years Later, the brutal murder of a young girl turn locals into vigilantes out for justice.

2. The "Gold Special" Train Robbery: Deadly Crimes of the D'Autremont Brothers, a daring train robbery by a trio of brother bandits goes wrong and turns deadly.

3. Murder of the Banker's Daughter: The Killing of Marion Parker, a brazen abduction of a schoolgirl turns tragic as authorities hunt for the killer.

4. Mass Murder in the Sky: The Bombing of Flight 629, a mother’s Christmas gift turns deadly, exploding in an airliner above Denver, with a domestic terrorist on loose.

5. The Amityville Massacre: The DeFeo Family's Nightmare, family is shot to death by a killer too close to home. Inspiration for The Amityville Horror movies.

7. Murderous Tandem: James Gregory Marlow and Cynthia Coffman, two killers pick off victims one by one till brought to justice.

8. Murder in Mission Hill: The Disturbing Tale of Carol Stuart & Charles Stuart, a wife’s murder draws national attention with an unlikely killer on the loose.

9. Murder in Bellevue: The Killing of Alan and Diane Johnson, in a case of parricide, a teenage girl’s obsession turns deadly. 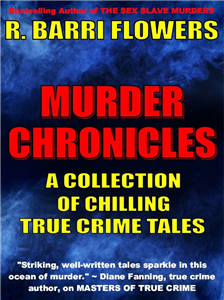 "Selected as one of Suspense Magazine's Best of 2011 books." -- John Raab, CEO/Publisher on THE SEX SLAVE MURDERS

“A model of exposition not to be missed by anyone interested in the annals of American criminal behavior.” --Jim Ingraham, Ph.D., professor emeritus of American Studies at Bryant University on THE PICKAXE KILLERS

“Exhaustively researched, each storyteller brings their own unique prose to these pages, creating what will soon become a true crime classic." --Kevin M. Sullivan, true crime author on MASTERS OF TUE CRIME

“This book should be a mandatory purchase and read for any true-crime buff.” —Steven A. Egger, PhD, associate professor on MASTERS OF TRUE CRIME

"An indispensable sourcebook for anyone interested in American homicide, from law-enforcement professionals to armchair criminologists." —Harold Schechter, criminologist on THE DYNAMICS OF MURDER

“These riveting tales are R. Barri Flowers at his chilling best. Flowers has shown once again that he's a master at the craft of writing true crime.” – Cathy Scott, bestselling true crime author