Science Fiction and the Cultures of Science in the Nineteenth Century

A cultural history of science and science fiction

Mesmerists, Monsters, and Machines interrogates the cultural implications of scientific development as articulated, challenged, and reformulated by science fiction. Each chapter demonstrates that both science and fiction were vital parts of a culture of imaginative and empirical practices that were continually reacting to, arguing with, and influencing one another throughout the nineteenth century. In an engrossing narrative that cites classic science fiction texts, Willis establishes a timeline for the reader so that the cultural significance of science fiction is understood and its complexity and relevance to the nineteenth century is demonstrated.

Those interested in nineteenth-century history and literature, cultural studies, the history of science, and science fiction will welcome this addition to the scholarship. 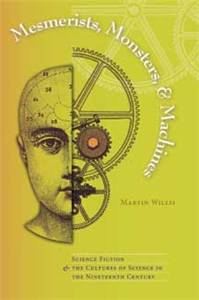