Memoirs of a Dutch Mudsill

John Henry Otto was born September 12, 1822, in Westphalia, Germany, and enlisted in the Prussian army sometime around 1845. According to his own account, he served in the war between Prussia and Denmark in 1848 and as a sergeant fought to suppress revolution in southern Germany. He was discharged in 1849 as a first lieutenant in the reserve but was called up again in 1850.

He deserted the Prussian army and came to New York in 1853. He was a carpenter and cabinetmaker in Appleton, Wisconsin, with a wife and five small children, when the Civil War broke out. In August 1862 he enlisted in the Union army, serving as third sergeant and ultimately as captain of his company. Otto was in command of his company from the Battle of Chicamauga until the close of the war and was engaged in many of the major battles and campaigns on the western front, including the Battles of Perryville and Stone’s River, the Tullahoma campaign, and the Battles of Chicamauga, Lookout Mountain, and Missionary Ridge. He accompanied General Sherman in the march through Georgia and the Carolinas. Captain Otto was discharged with his regiment in June 1865.

Otto kept a journal throughout the war and afterward arranged his reminiscences in a memoir, which he completed around 1890. Captain John Henry Otto was a keen observer, and his memoirs paint a vivid picture of the life of a common soldier and of a line officer at the company level during the Civil War. Memoirs of a Dutch Mudsill will appeal to Civil War enthusiasts and scholars. 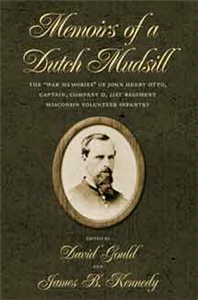