Revelations of a God

Aoratos is an old friend, an illuminating energy which arrives without warning. It can be male or female, if such an impression is necessary, or androgynous when gender is immaterial. These visitations occur during or immediately after meditation, or more usually when least expected, during work or some other relaxed state when the mind is productively occupied. Sometimes it arrives within the body of a fellow human being, distinct and separate from the resident soul, and speaks through that person, and sometimes it makes an appearance during dreams, although the latter is by far the rarest and sometimes incomprehensible.

This work has evolved as a result of several visitations experienced during a period of fairly intense work among friends and acquaintances and while writing not only for myself but for national publications specialising in the field of MBS (mind, body, spirit). The message which came through loud and clear was that much on offer to the general public was not only misleading but dangerous insofar as the methods targeting those desirous of spiritual self-improvement could in fact be destabilising to some of the more sensitive types among us. Some claims were outrageously misleading while others were quite simply nonsense.

Worth remembering is that meddlers in matters of spirit are subject to the laws of Karmic return, that any ‘work’ they do is ultimately subjective.

The messages that subsequently came through from Aoratos were succinct and often surprising, and I was instructed to weave them into a parable, or light-hearted fictional essay of my own invention to make the work eminently readable to the general public while offering a flow of real energy and a raise in frequency to those on a reciprocal wavelength. 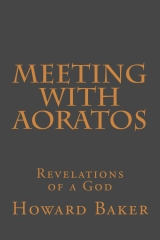 Following a conventional upbringing and education in London and Kent, Great Britain, Howard packed a rucksack and left England to tour Europe. After  working for a spell in Germany he went further  overland to various countries of the Middle East, from whence he returned by working a passage on a freight ship via the Cape of Good Hope back to Europe. Shortly after, he met Lynda. They married, moved away from Kent to Wales, and after two further moves within the same region found the smallholding for which they had been looking. Five years later with two small children and caught up in the economic crisis affecting the country they decided to move back to Kent if only for the benefit of the education of their daughters. Remaining there until both daughters had left home, Howard and Lynda then moved to France to set up again in the business of running a smallholding where they now supply several families and organic outlets with vegetables, eggs and fruit. All is by decision on a small scale, and all measures where possible are taken to adhere to a sustainable-energy way of life, as they are aware that the 'village economy' is an ecologically-sound way forward. During two visits to the Krishnamurti Centre at Brockenhurst in Hampshire, England, one in the mid-Seventies and the other in the Eighties shortly before JK passed on, Howard and Lynda became deeply impressed with the message being passed on from the centre.

His works include a cult classic, a three year stint writing for Kindred Spirit Magazine, and several screenplays.