Lessons from the European Social Survey

With the expansion of the European Union and the development of supra-national governance worldwide, the volume of cross-national data and the importance of rigorous comparative analysis has grown rapidly.

This book, written by members of the design and implementation team for the groundbreaking European Social Survey (ESS), reviews current best practice in the conduct of cross-national, cross-cultural quantitative research. The first eight chapters cover the background and rationale for the Survey and offer a detailed analysis of the methods and procedures used, as well as exploring ways to overcome the obstacles to successful cross-national research. The final chapter looks ahead to future comparative surveys and discusses the lessons that can be learned from the ESS.

As well as examining methodological issues, Measuring Attitudes Cross-Nationally includes four substantive chapters on the findings of the ESS, including the emergence of hitherto unknown national differences in values regarding immigration and perceptions of citizenship. The ESS data is also considered in comparison with that from US General Social Survey.

Measuring Attitudes Cross-Nationally offers a practical guide, firmly grounded in theory, for researchers across the social sciences who have an interest the design, planning or interpretation of cross-national social surveys.

Research Professor at City University London and director of the Centre for Comparative Social Surveys. He has been the Coordinator of the European Social Survey since its inception in 2001, chairing its Central Coordinating Team, and - prior to that - the ESF's Methodology Committee which crafted its design. He was formerly the founder director of the National Centre for Social Research (NatCen).

Senior Research Fellow in the Centre for Comparative Social Surveys at City University and a member of the Central Co-ordinating Team of the ESS. She was formerly at the London School of Economics and the Office for National Statistics.

Senior Research Fellow in the Centre for Comparative Social Surveys at City University and a member of the Central Co-ordinating Team of the ESS. He was formerly at NatCen and at Gallup.

Research Assistant in the Centre for Comparative Social Surveys at City University and a member of the Central Co-ordinating Team of the ESS. 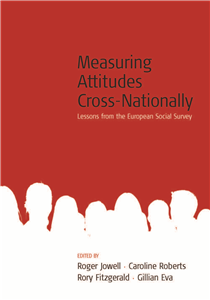