Although the Franco-American communities of Southbridge, Massachusetts, and Woonsocket, Rhode Island, have much in common historically, the shift from French to English has advanced to differing degrees in the two locations. In this book, Louis Edward Stelling explores morphosyntactic variation and the advance of language shift using historical documentation, U.S. census figures and interviews conducted with sixty-nine informants.After comparing and contrasting the sociolinguistic profiles of the two communities, Stelling describes some of the linguistic consequences of the shift from French to English in these traditional Franco-American centers through an analysis of two morphosyntactic variables: use of auxiliary verbs (être and avoir) in the passé composé and use of synthetic (inflected) and analytic (periphrastic) future forms. Findings provide new insight for understanding linguistic change during situations of language decline.Southbridge and Woonsocket stand out as unique cases of language shift. Despite the differing degrees to which a gradual shift from French to English has advanced in the two communities, speech norms are remarkably similar today. While certain aspects of grammar are certainly changing, this is also the case in settings where French is the majority language. Moreover, variation among forms representing an overtly prescribed point of grammar bears all of the social meaning found in non-obsolescent varieties. Despite the sociolinguistic situation of language shift, the French language shows a degree of grammatical conservatism in both Southbridge and Woonsocket which may render this variety remarkably resistant to those qualitative changes which would otherwise add to the stigma of Franco-American French. 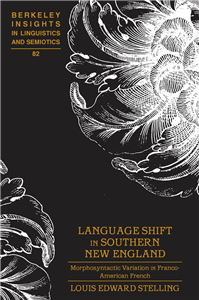