'...it will appeal not only to students of journalism and media but also to anyone interested in the world around them' - Marie Kinsey, Times Higher Education Supplement

'Professor Tumber weaves together traditional and topical themes to produce a comprehensive overview of the media's role at times of conflict' - Stewart Purvis, Professor Of Television and Journalism, City University London

'Journalists under Fire presents a vivid picture of what it's like to be working as a journalist on the front line during a 'modern' war. Through the eyes of leading correspondents in the field the authors examine their experience and its impact on the audience, their profession and their own lives' - The Information Centre about Asylum and Refugees in the UK (ICAR)

Journalists Under Fire is the first book to combine a conceptually audacious analysis of the changing nature of war with an empirically rich critical analysis of journalists who cover conflict.

In Journalists Under Fire, authors Howard Tumber and Frank Webster explore questions about the information war and journalistic practices.

Frontline correspondents play a key role in information war, but their position is considerably more ambiguous and ambivalent than in the epoch of industrial war. They play a central role in the presentation of what is often spectacle to audiences around the world whose actual experience of war is far removed from combat.

In the era of multi-national journalism, of the internet and satellite videophone, the book highlights central features of media reporting in contemporary conflict. Drawing on over fifty lengthy interviews with frontline correspondents, the authors shed light on the motivations, fears and practices of those who work under conditions of journalism under fire.

Journalists Under Fire is designed for undergraduate and postgraduate students and for scholars, academics and researchers in the fields of Journalism, Journalism Studies, Communication, Media Studies, Sociology, Cultural Studies, International Relations and War Studies. 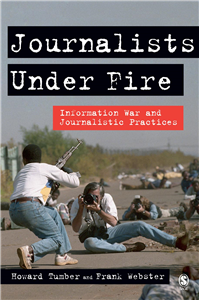