Manners and Emotions Since 1890

'This book shows that manners, far from being superficial adornments of behaviour, are thoroughly interwoven with our personalities and the structures of our societies. The concept of 'informalization' provides both an invaluable addition to Norbert Elias's theory of civilizing processes and a most useful tool for understanding how changes in manners are related to shifts in the balances of power between social classes, sexes, and generations' - Johan Goudsblom, University of Amsterdam

'Informalization supplants and surpasses all previous work on the changing manners and emotional styles of the West in the last century. Wouters helps us to understand trends in Britain and the USA gains from Wouters comparing them not just with each other, but also with Germany and the Netherlands' - Stephen Mennell, University College Dublin

'Cas Wouters stakes out a powerful theory about changes in human relationships in the Western world over the past twelve decades... essential reading for anyone interested in the contemporary human condition' - Theory and Society

'It is written in clear, unequivocal language, abounds with detail and replaces many normative statements about the alienating state of contemporary , capitalist, mass-consumption-oriented bureaucracy.... A nuanced, subtle and theoretically informed analysis of the sometimes quite chaotic civilising process of the last century' - Figurations

This highly original book explains the sweeping changes to twentieth-century regimes of manners and self. Broad in scope and deep in analytic reach, it provides a wealth of empirical evidence to demonstrate how changes in the code of manners and emotions in four countries (Germany, Netherlands, England and the US) have undergone increasing informalization. From the growing taboo toward the displays of superiority and inferiority and diminishing social and psychicogical distance between people, it reveals an 'emancipation of emotions' and the new representation of emotion at the centre of personality.

" The increasing permissiveness in public and private manners, such as introductions, the use of personal pronouns, social kissing, dancing, and dating

" The ascent and integration of a wide variety of groups - including the working classes, women, youth and immigrants - and the sweeping changes this has imposed on relations of social inferiority and superiority

" The shifts in self-regulation that require manners to seem 'natural', at ease and authentic

" Rising external social constraints towards being reflexive, showing presence of mind, considerateness, role-taking, and the ability to tolerate and control conflicts, to compromise

Continuing the analysis of Sex and Manners, this book is a dazzling work of historical sociology and a fascinating read. 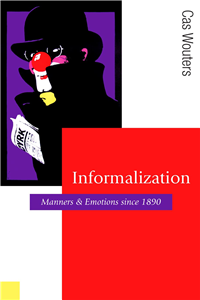