How We Got to Coney Island

The Development of Mass Transportation in Brooklyn and Kings County

Coney Island is the most famous seaside resort the world has ever known. This new book by transportation historian Brian Cudahy tells how a unique blend of enterprises emerged in the final years of the nineteenth century to connect Coney Island with the independent municipality of Brooklyn, with New York City, and, ultimately, with the rest of the world. The story of travel to Coney Island involves horse-drawn streetcars, steam-powered railways, and elevated trains running along viaducts over city streets, not to mention a cable-powered railway that once crossed the Brooklyn Bridge, sidewheel excursion boats steaming down the Narrows, and even such contemporary transport options as air-conditioned subway trains and private automobiles speeding along the Belt Parkway. How We Got to Coney Island is, in reality, the definitive history of mass transportation in Brooklyn. It tells how a famous general by the name of Henry Slocum, who fought with Meade at Gettysburg became the president of the first rail company to serve Coney Island.;It also describes the origins of a company called Brooklyn Rapid Transit that eventually unified the street, excursion, and elevated railways of Brooklyn into a smoothly functioning system in the final years of the nineteenth century. Brooklyn Rapid Transit, though, would not survive. While it did participate in the construction of a massive citywide subway system in the early years of the twentieth century, the company entered receivership in 1918, was re-organized as the Brooklyn-Manhattan Transit Corporation five years later, only to surrender its corporate status entirely in 1940 and become the BMT Division of the Board of Transportation of the City of New York. The era that is critical to these developments, though, is the last quarter of the nineteenth century, when entrepreneurs raised enormous sums of private capital, and constructed railways across the lightly settled flatlands of southern Kings County so people could travel to and from Coney Island. Cudahy's new book also tells how the city of Brooklyn became only the third city in all of America to deploy a system of horse-powered streetcars so its citizens could enjoy an enhanced level of urban mobility.;How We Got to Coney Island includes tables, charts, photographs, and maps. The full story of transportation to and from the world's most famous seaside resort also provides an enticing glimpse into what people did once they reached Coney Island. 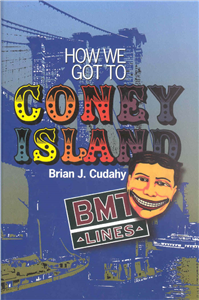