This book explores the significant, civilizing role that horticulture has played in the development of farmsteads and rural and urban communities on the High Plains portions of Colorado, Kansas, Nebraska, South Dakota, and Wyoming, drawing on both the science and the application of science practiced since 1840.

Freeman explores early efforts to supplement native and imported foodstuffs, state and local encouragement to plant trees, the practice of horticulture at the Union Colony of Greeley, the pioneering activities of economic botanists Charles Bessey (in Nebraska) and Aven Nelson (in Wyoming), and the shift from food production to community beautification as the High Plains were permanently settled and became more urbanized.

In approaching the history of horticulture from the perspective of local and unofficial history, Freeman pays tribute to the tempered idealism, learned pragmatism, and perseverance of individuals from all walks of life seeking to create livable places out of the vast, seemingly inhospitable High Plains. He also suggests that, slowly but surely, those that inhabit them have been learning to adjust to the limits of that fragile land.

The book will appeal to not only scientists and professionals but also gardening enthusiasts interested in the history of their hobby on the High Plains. 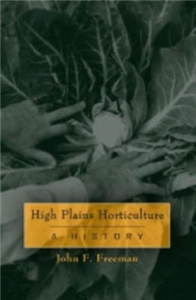