In short, incisive scenes this novella explores the role of theatre, film, dreams and nightmares in and beyond life in a situation of sadistic imprisonment, and explores the way the inevitable and dramatic unfolding of their oppressors’ horrific plans impact upon the lives of three individuals (who are also artists) and their friendship. The novella has a contemporary feel due to the framing of it in the present and in the form of a talk to an audience.

It opens with the main character, an elderly famous actor known only as Carl, reciting Shakespeare to the walls of a dilapidated barrack. His much younger friend, an acclaimed photographer and cameraman known only as Carl’s friend, and a new arrival to the camp, breaks the illusion of Carl’s apparent spell of madness with ‘his rescue’ of Carl by reciting some lines from Carl’s earlier portrayal of Goethe’s Mephistopheles on the stages in Prague, and by reminding him of their shared friendship and companionship before the terror was unleashed. Simultaneously, the backdrop of evil, and Faust’s pact with the devil is brought immediately into sharp focus, and is omnipresent in various forms throughout as the protagonists struggle with their sense of theatre and reality before and since life in the camp and their own use of illusion, illicit theatrical performances and dreams as a self-preservation strategy during their imprisonment.

Lines from Shakespeare and Goethe’s ‘Faust’ are interspersed with the characters’ own reflections and interactions and lift the characters to a higher plain, and beyond the immediate brutal circumstances and oppression. The slow-moving opening gives way to an ever-increasing momentum as external circumstances plunge the two main protagonists into situations which force them to the edge of humanity. 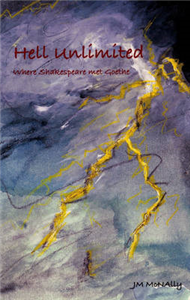 I found the narrative quite compelling, with a very effective central conceit ... and it’s very powerful.

I find ‘Hell Unlimited’, which I have just started, particularly gripping – bold in its conception and unusual in its approach.

This work has evolved over many years. Its origins date back to the period when I was exploring the role of artists and art during the turbulent years of the Weimar Republic (1919-1933). I was fascinated by the artistic and creative synergy of the literary cabarets which brought together high quality artists (new and established) from the fields of music, literature, visual arts and dance. But I was also interested in the immediacy and topicality of the political-literary cabarets which also tried to address the rise of National Socialism through various modes of humour.

In 2000, I realised that I needed to explore beyond the Weimar Republic in order to connect with the fates of individual artists, in spite of the fact that I had not really wanted to get too involved in one of the bleakest periods of history and of humanity: the Third Reich with its manufactured state of fear and terror; with its racially-driven and expansionist policies of ‘property-grabbing’ and ‘land-grabbing’; with its arbitrary justice and executions; and with its mass killings and extermination programmes.

Theresienstadt seemed an obvious place to start this quest. By 2002, I knew that I had to write a play about Theresienstadt – the conference papers I was giving during this period already show these thoughts in action. I made many beginnings – false ones – as they all began with the place. Yet, I knew I wanted to create something which would also transcend time and place, and which would bring humanity, creativity and glimpses of humour to the foreground, in spite of the backdrop. Then suddenly, from nowhere, the two main fictitious protagonists, Carl and Carl’s friend began a dramatic dialogue in my mind. It was their individual lives which suddenly spoke to me, which suddenly took hold of me. It was autumn 2004 and I was on a short research-related visit to Berlin. I spent the whole day transcribing their dialogue. I have made only minor changes to this initial impulse which became the foundation for the poetic novella and play.

Just wanted to tell you I’ve read your book (& so has my husband) and we’re very impressed. It’s truly unusual, very very clever, & poetic. I felt close to the protagonists, distant as they were....it could become a cult book...I admire the way you have forged on, despite many setbacks. Do be sure to tell me when your next book is ready [Marching without Knowing]. I am ordering this one for my son in law who is a great war reader…Thank you again for giving me a copy of this remarkable, original work. I can just imagine all the thought that has gone into it.

[Dr McNally] again gave a most stimulating paper on methods of recreating and analysing the past in cabaret using as examples a cabaret in Tel Aviv that re-enacted a performance at the Theresienstadt concentration camp and the Berlin cabaret “The Thistle” where the past of East German cabaret was reviewed “critically”. Her paper inspired the longest and liveliest discussion of all.

I found the narrative quite compelling, with a very effective central conceit – I like the way you work with layers of reality, and use Shakespeare ( I can’t comment on Goethe as I don’t know his work) to intensify experience that defies language. Not so sure about some elements of style – in fact, and I suppose this isn’t surprising, it almost reads like a play than a novel. I can’t make up my mind whether the culminating act of revenge works, though I can see what you’re doing with it, the transformation of victim into predator, the breaking free from the Hamlet syndrome, and it’s very powerful.

I have been reading both XChanges and Hell Unlimited and am full of admiration for the passion and commitment with which you approach writing…I do agree with you about the necessary and fruitful ambiguity of language (and its corollary, the power of language to deceive) and about the deep problems facing the world – though perhaps to be human is in itself the deepest problem.

I find ‘Hell Unlimited’, which I have just started, particularly gripping – bold in its conception and unusual in its approach.

I think that your narrative poems are your best ones because they allow you to decorate the events with fantasy, which is clearly your strong point.

ABEL PUBLISHING has chosen to review this offer before it proceeds.