Handbook of Families and Poverty

''The Brigham Young University Family Studies Center sponsored a three-day research conference on Families and Poverty in March of 2004. The conference covered a broad range of topics including parenting, health care for poor families, how family processes influence families experiencing economic hardship, consequences of welfare reform in the United States, economic status of ethnically diverse elderly, and microentrepreneurship in developing countries. This handbook was built out of the papers presented at this conference.''?''According to the U.S. Census Bureau, ôIn 2004, 37 million people [in the U.S.] were in poverty, up 1.1 million from 2003.ö· ThatÆs a 12.5‰ increase in one year. Worse yet - the rate has increased over the last four consecutive years. A major goal of this handbook will be to highlight the common issues and concerns related to how this is affecting families. Disciplines represented will include: business, child development, family studies, marriage and family therapy, nursing, political science, population studies, psychology, public policy, social work, and sociology.

'Written by respected scholars from a variety of relevant disciplines, this handbook will cover hotly debated issues associated with public policy and funded research as they relate to families and poverty. Contributors, bringing multiple perspectives to bear, will aim to show alternatives to welfare in subgroups facing specific challenges that are currently not adequately addressed by the welfare system. (Several works have focused on welfare reform and poverty, but few have included as extensive a discussion.) Readers wil lalso appreciate the insightful summaries of research involving poverty and its relationship to couple, marital, and family dynamics. 2004 is the most recent year for which this sort of census information is available. 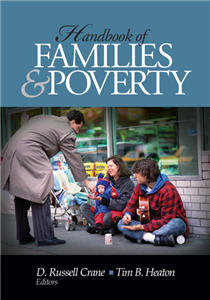