Guide to the Presidency and the Executive Branch

This comprehensive two-volume guide is the definitive source for researchers seeking an understanding of those who have occupied the White House and on the institution of the U.S. presidency. Readers turn Guide to the Presidency for its wealth of facts and analytical chapters that explain the structure, powers, and operations of the office and the president's relationship with Congress and the Supreme Court.

The fifth edition of this acclaimed reference completes coverage of the George W. Bush presidency, the 2008 election, and the first 3 years of the presidency of Barack Obama. This includes coverage of their handling of the economic crisis, wars abroad, and Obama's healthcare initiatives. The work is divided into eight distinct subject areas covering every aspect of the U.S. presidency, and all chapters in each subject area have been revised and updated:

Origins and Development of the Presidency, including constitutional beginnings, history of the presidency and vice presidency, and presidential ratings

Powers of the Presidency, including the unilateral powers of the presidency and those as chief of state, chief administrator, legislative leader, commander in chief, and chief economist

The Presidency and the Executive Branch, including the White House Office, the Office of the Vice President, supporting organizations, the cabinet and executive departments, presidential commissions, and executive branch housing, pay, and perquisites 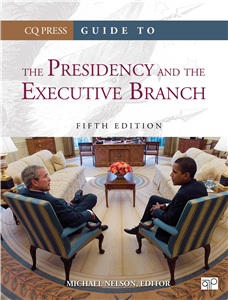