Growing Up With Clemente

“Alongside August Wilson and John Edgar Wideman, Richard Peterson is among the most evocative chroniclers of Pittsburgh, their colorful hometown. I loved Growing Up With Clemente for both its unnostalgic lyricism and its utter honesty.”
—David Maraniss, author of Clemente: The Passion and Grace of Baseball’s Last Hero

“Richard Peterson’s memoir reminds you of Faulkner’s assertion that man will not merely endure, he will prevail. For that’s what Peterson has done, and he makes this story about the grandson of a Lithuanian immigrant—this quintessential American story—new all over again. It’s vivid. Fascinating. Troubling. Sad. And finally satisfying. A triumph both in the living and in the telling. I read it in two sittings, fully in its thrall.”
—Kent Haruf, author of Plainsong

Pete Peterson’s prose picks you up by the scruff of the neck and the seat of the pants and pitches you deep into a place and time that will hurry you back to your own coming of age. He is Pittsburgh to the bone and his writing—trenchant, crisp and painfully honest—reflects it. If you regard the place where you grew up as special, this book is for you. I commend Growing Up With Clemente to you with a writer’s highest praise: I wish I’d written it.”
—Phil Musick, is a veteran Pittsburgh journalist and author of six books, including a biography of Roberto Clemente.

“An engaging, clear-eyed account of a working-class childhood in Pittsburgh, set against the backdrop of Roberto Clemente’s storied career with the Pittsburgh Pirates. Peterson is forthright in his depiction of the limited hopes and expectations of working-class kids in what was then a toxic industrial landscape. Rich in period detail and sense of place, Growing Up With Clemente is above all a book about memory and about ambiguous memories nonetheless cherished, a revealing excursion into a time now gone.”
—Laurie Graham, author of Singing in the City: The Bonds of Home in an Industrial Landscape

“I always enjoy Pete Peterson’s writing immensely. His prose is consistently vivid, poignant, smart, and utterly without pretension. Growing Up With Clemente is no exception.”
—Jeffrey Hammond, Reeves Distinguished Professor in the Liberal Arts, St. Mary’s College of Maryland

Growing Up With Clemente is a personal history of the hardscrabble life of Pittsburgh’s South Side during the city’s post–World War II renaissance. It is also the intimate story of an American boy who played baseball on the city’s dilapidated playgrounds and rooted for his beloved sports teams while growing up and struggling in Pittsburgh’s blue-collar neighborhoods. Though among the worst professional teams in the 1950s, the Pirates and Steelers still inspired the working-class dream of a life beyond the steel mills. And in the midst of it all was the towering, isolated figure of Roberto Clemente. Clemente would eventually become a symbol of pride, loyalty, courage, and sacrifice for a city that had initially rejected him and for a young boy who spent his youth looking for a hero but had to grow up before understanding Clemente’s greatness.

With sensitivity and eloquence, Richard Peterson captures a time and place easily overlooked or forgotten but important to understanding the significance of sports in shaping America’s working-class character. Whether discussing race, sex, class, or any of the other larger issues of the world in which he grew up, Peterson conveys an honesty rarely found in memoirs. Growing Up With Clemente is an engaging read, sure to be a hit in both the literature and sports communities. 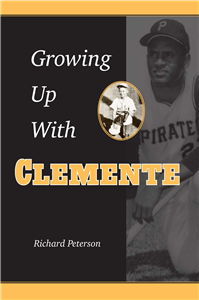