Greece in British Women’s Literary Imagination, 1913–2013 offers a comprehensive overview of British female writing on Greece in the twentieth century and beyond. Contributors cover a vast array of authors: Rose Macaulay, Jane Ellen Harrison, Virginia Woolf, Ann Quin, Dorothy Una Ratcliffe, Elizabeth Taylor, Barbara Pym, Olivia Manning, Mary Stewart, Victoria Hislop, Loretta Proctor and Sofka Zinovieff formed special ties with Greece and made it the focus of their literary imagination. Moving from Bloomsbury to Mills & Boon, the book offers insight into the ways romantic literature has shaped readers’ perceptions about Greece. Why have female authors of such diverse backgrounds and literary orientations been attracted by a country burdened by its past and troubled by its present? What aspects of the country do they choose to highlight? Are female perceptions of Greece different from male ones? The book examines these and many more exciting questions. Given its focus and diversity, it is addressed to audiences in English and Greek studies, Classical reception, European modernism, cultural studies and popular fiction, as well as to non-academic English-speaking readers who have an interest in Greece. 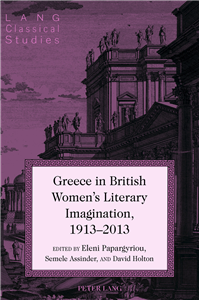