God Spoke to Me

This work was Eileen Caddy's first book and contains some of the earliest guidance she received from her "inner voice" after she, her husband Peter, their three sons and a friend, Dorothy Maclean, came to live on a caravan site on the edge of the northern Scottish village of Findhorn in 1962. During the following years, others joined them in what rapidly became recognised as a spiritually pioneering way of life. Now, at the beginning of the 1990s, the Findhorn Foundation and its associated community, comprising some several hundred people and a variety of lifestyles and businesses, is a focus of attraction for several thousand visitors each year from around the world.;Eileen's life over the past thirty years or so has been a process of coming to realise that God is the divine essence within each person. Her guidance has stated this fact over and over again, but it has taken some years for Eileen to accept it as a reality. In the beginning her inner voice addressed her as "My child" and spoke to her as does a loving father. Over the years, as this relationship changed, her voice began to call her "My beloved". Now she feels she can truly say that there is no separation and that this is so for everyone.;The messages in this book are about learning to trust totally the process of living, to trust God, the universe, the divine source or whatever you prefer to call it. They affirm that there is an inherent wisdom and intelligence present in everything, including ourselves, and that it can be contacted by turning within.;There is also advice about moving into a new age, which should be regarded not so much as a period of time as a new kind of consciousness. It is a process of connecting with the divine, seeing with new eyes, recognising God within everything. It is also about creating something new by means of vision, bringing into form from within that which is for the highest good of all.;Although Eileen's voice relates to her in these early messages like a father who knows what is best for his child, there is throughout an emphasis on the free will and choice of the individual. This isn't a God of fire and brimstone issuing orders from on high, but an all-seeing source of compassion and love whose only wish is for all beings to realise their highest potential. 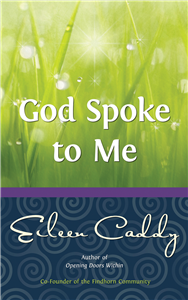 Findhorn Press Ltd. has chosen to review this offer before it proceeds.