Globalization on the Margins

The essays in Globalization on the Margins explore the continuities and changes in Central Asian education development since the collapse of the Soviet Union in 1991. Reflecting on two decades of post-socialist transformations, they reveal that education systems in Central Asia responded to the rapidly changing political, economic, and social environment in profoundly new and unique ways. Some countries moved towards Western models, others went backwards, and still others followed entirely new trajectories. Yet, elements of the “old” system remain._x000D_ _x000D_ Rather than viewing these post-Soviet transformations in isolation, Globalization on the Margins places its analyses within the global context by reflecting on the interaction between Soviet legacies and global education reform pressures in the Central Asian countries of Kazakhstan, Kyrgyzstan, Tajikistan, Turkmenistan, and Uzbekistan. Instead of portraying the transition process as the influx of Western ideas into the region, the authors provide new lenses to critically examine the multidirectional flow of ideas, concepts, and reform models within Central Asia._x000D_ _x000D_ Notwithstanding the variety of theoretical perspectives, methodological approaches, and conceptual lenses, the authors have one thing in common: both individually and collectively, they reveal the complexity and uncertainty of the post-Soviet transformations. By highlighting the political nature of the transformation processes and the uniqueness of historical, political, social, and cultural contexts of each particular country, Globalization on the Margins portrays post-Soviet education transformations as complex, multidimensional, and uncertain processes. 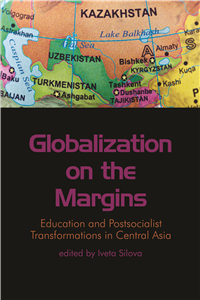