The first modern biography of this notable politician

“Mach’s detailed and thoughtful examination of Ohio lawyer-politician-diplomat George Hunt Pendleton is an impressive piece of scholarship and will surely be the standard for decades to come.”
—H. Roger Grant, Department of History, Clemson University

George Hunt Pendleton is a significant but neglected figure in the history of nineteenth-century politics. A Democrat from Cincinnati, Ohio, Pendleton led the midwestern faction of the party for much of the nineteenth century. He served in the Ohio Senate for one term before serving in the U.S. House of Representatives from 1857 until 1865. He was a leader of the Extreme Peace Democrats during the Civil War and was General George B. McClellan’s running mate in the presidential campaign of 1864. Losing both the election and his seat in the House, he spent almost fifteen years out of public office. During those years he remained active in the Democratic Party both within Ohio and across the nation and was rewarded with a seat in the U.S. Senate. Serving one term from 1879 to 1885, Pendleton fathered the first major civil service reform legislation, the Pendleton Act of 1883.

“Gentleman George” not only provides a microcosm of Democratic Party operations during Pendleton’s lifetime but is also a case study in the longevity of Jacksonian principles. In an era of intense Democratic factionalism stretching from the 1850s to the 1880s, Pendleton sought to unite the divided party around its traditional Jacksonian principles, which, when reapplied to address the changing political issues, became the foundation of the midwestern Democratic ideology.

With its close examination of nineteenth-century American politics, this biography will be welcomed by scholars and lovers of history alike. 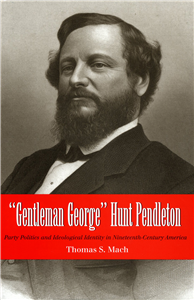