In her latest journey, the most exotic and challenging of them all, Bettina Selby set out to explore the land of ancient African empires along the southern fringes of the Sahara Desert. Following the course of the river Niger, from Niamey through the fabled city of Tibuktu and so on to Djenne and Segou, she reveals a lost world of cities founded centuries ago on the rich profits from trade and spices, gold and slaves.

It was not only the siren call of these cities that drew Bettina to the Sahel, but the harsh beauty of the land and curiosity about the people who live there now. Some Fulani and Tuareg, still proudly nomadic manage to scrape a living from the thin soil as the desert encroaches. In the mountains to the south the Dogon have lived for centuries in their curious villages clinging to the cliffs, still haunted by the spirits of their ancestors.

Needless to say the spectacle of a single woman on a bicycle was greeted with amazement and curiosity in almost equal measure. But even an all-terrain bicycle was not always equal to the desert conditions, so Bettina, nothing if not flexible, took to pirogue, camel or bush taxi as the occasion demanded. With the ‘strong brown god’ of the Niger flowing through her account, a lost corner of Africa unfolds on either side. Full of echoes of the past, its future is precarious, and Bettina Selby captures it here, remote, elusive and in transition.

Bettina Selby is a real adventurer 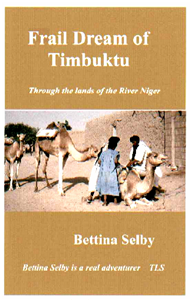