Glyde, Gonzo, and Azul have one thing in common: they’re all flying as flocks of one. Other than his father, Lupé, Glyde has never seen a pure Guadalupe petrel, so when he hears of a similar petrel in danger, he implores his father to join him in a daring rescue attempt. Along the way, Glyde is joined by Gonzo, an endangered ivory-billed woodpecker, Zomis, the last remaining passenger pigeon, and a barred owl who speaks only in Shakespearean English.

Meanwhile, after losing his mate and being smuggled out of the shrinking Caatinga, Azul finds himself in the care of a celebrated conservationist. However, not everything is as it seems, and the Spix’s macaw must fight to return to the place he knows best. But with a disappearing habitat and without a mate, can his journey lead him home?

The John Morano Eco-Adventure Series is back with a fourth installment that asks the question: What does it mean to be home in a changing world? As the climate warms and habitats are lost, will the man-flock help the birds before it's too late, or will these flocks of one become flocks of none?

Featuring a special introduction by Andrew Sharpless, CEO of Oceana. 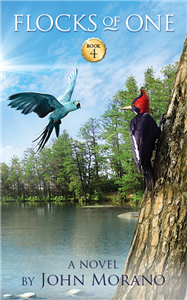 • Introduction by the President of Oceana, Jim Simon. All books in the series have introductions/endorsements from notable environmentalists. • Ideally suited for adaptation as an animated feature by a studio such as Pixar or Disney

John Morano is Professor of Journalism at Monmouth University in New Jersey. Professor Morano has won many teaching awards, including The Distinguished Faculty Award, The Celebration of Teaching Award, and five consecutive Student Choice Awards. John enjoys playing basketball, reviewing films, hunting for fossils, throwing Frisbee with his dog, and barbequing with his family.

Grey Gecko Press has chosen to review this offer before it proceeds.