A Team from Another Planet!

This book is an exclusive and groundbreaking study of Pep Guardiola’s Barcelona team. This information and analysis of one of the most successful club sides in history has been in high demand and it is finally here!

The attacking play of Barcelona is admired by every coach, player and fan in the world. Each player movement and passing combination is broken down in detail for every coach to apply these tactics to their own team. Here is the chance to learn to play the ‘Bara way.’

We now have a full analysis of Barcelona’s tactics which have been so important to their success. The book shows Barca’s 4-3-3 system of play, each player’s responsibilities, positioning and movement within every possible phase of play.

Terzis Athanasios is a Tactical Professor of Football and has compiled an extensive assessment of Barcelona’s attacking play after over 1000 hours of studying all the games from the 2010-11 season. Guardiola’s team has won 3 La Liga championships, 2 UEFA Champions Leagues, 4 Spanish Cups, 2 Super Cups, and 2 FIFA World Club World Cups.

The book starts with the characteristics of the players and the philosophy of Barcelona and builds into a comprehensive overview of the offensive tactics employed with clear diagrams and detailed descriptions.

This gives football coaches an unbelievable chance to learn how Barcelona play and employ their tactics to maintain possession, create chances and score goals. Barcelona is by far the best attacking team of the modern era and now you can see how and why this is the case. 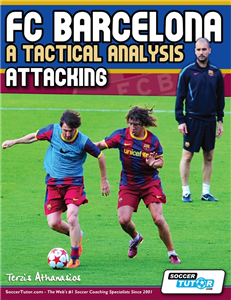 SoccerTutor.com Ltd has chosen to review this offer before it proceeds.